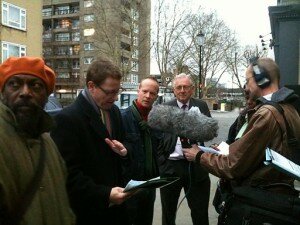 Jonathan Freedland and guests record a few yards from the spot where Kelso Cochrane was murdered. Picture: BBC

Jonathan Freedland takes the long view of the Stephen Lawrence case, comparing it with the racist murder of Kelso Cochrane in Notting Hill in 1959.

The fatal stabbing of Kelso Cochrane in West London in 1959 sparked outrage among the local community. Police denied that the attack was racist and their investigation failed to catch Kelso's killers - even though their identity was an open secret on the streets of Notting Hill. The case bears striking similarities to the murder of Stephen Lawrence three decades later.

Jonathan draws lessons from the Lawrence and Cochrane murders with a panel including former Home Secretary Jack Straw who set up the Macpherson Inquiry, Colin Prescod of the Institute of Race Relations, the Lawrences' former MP Sir Peter Bottomley and Superintendent Leroy Logan of the Black Police Officers' Association.

The story of the Cochrane case is told by Mark Olden, author of the book 'Murder in Notting Hill' and readings are provided by Josette Simon, the voice of Doreen Lawrence on Radio 4's 'Book of the Week'.