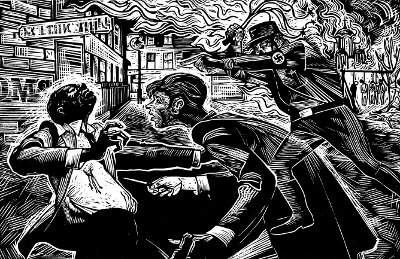 Political cartoonist Ken Sprague’s take on the murder: a knife-wielding Teddy Boy is urged on by a Nazi.
Reproduced with kind permission of the Ken Sprague Fund.

"Gradually, long after the smoke clears, the pieces begin to come together... An excellent and riveting read." Stuart Hall, Emeritus Professor at the Open University and cultural theorist.

"Murder in Notting Hill, a hybrid of social commentary and police detection, grippingly recreates the killing and looks at its legacy today. Mark Olden, a London journalist, displays a terrier-like devotion in locating elderly Notting Dale inhabitants for interview and trawling public archives for information. In pages of atmospheric reportage he brings 1950s Notting Dale vividly to life, with its boozers, nightclubs and cinemas frequented by the likes of Colin MacInnes...Any lingering hope of justice has now apparently gone. In the meantime, we can read this superb work of social history, in all its gritty actuality." Ian Thomson, author The Dead Yard, Spectator review

"In the story of race and justice in this country, the murder of Kelso Cochrane is like an unhealed wound. Today's readers will see many similarities with what happened in relation to Stephen Lawrence - the missed opportunities in the investigation, the denial of the race motive, the obvious official discomfort and confusion - but this is a tragedy in its own right, and all the more dreadful in a time when racism was often overt and tolerated. Mark Olden has written a first-rate, highly readable account of the known facts, but he has also gone farther, tracking down surviving witnesses and, with due care and caution after all these years, shedding new light on the case. For anyone interested in justice in modern Britain this is an important book." Brian Cathcart, author The Case of Stephen Lawrence.

“In his new re-investigation of the 1959 murder in the heart of Notting Hill of a black man, Kelso Cochrane, author Mark Olden brilliantly describes a postwar world where feral young white men, drunk on beer, high on bravado, terrified at the emergence of a community they did not recognise or understand, made a statement of their own with regular bouts of ‘nigger hunting’.” Hugh Muir, The Guardian.

"Some crimes echo down over the years, not just because of the pain or death they cause, but because of the social wounds and patterns of injustice they reveal. This murder is one. Mark Olden has done a fine job of combining investigative reporting and suspenseful storytelling about a crime whose legacy has not gone away." Adam Hochschild, author King Leopold's Ghost.

"Not only is this a meticulous and important work of investigative journalism, but it is also, and perhaps more crucially, a compelling analysis of the conditions in which extreme right-wing politics and racism thrived to such an extent that a 'stranger' of the wrong colour could be killed with impunity.” Professor Roger Bromley, Emeritus Professor of Cultural Studies, University of Nottingham.

“Olden constructs a pacy, cross-cutting account of the murder and its aftermath, richly evoking the colours and tensions of the period... Closer to the present day, [he] recounts poignant journeys to visit old men eking out their pensions in sad decrepitude, reminiscing about the good old days of criminal gangstership and, finally, revealing to him Notting Hill's 'worst kept secret', the identity of the murderer. The author concludes that investigative mistakes, as well as a reluctance to inflame racial tensions any further, meant that ‘Cochrane had little chance of ever getting justice.’ This book is at least a belated shadow of some.” Steven Poole, The Guardian review.

“Ranging in time from the 1950s to the present day and drawing on numerous interviews with witnesses and suspects as well as books, official files and newspaper accounts, it combines a compelling ethnography and social history of the area with determined detective work and atmospheric reportage... In doggedly pursuing this task and by vividly recreating a tragic and pivotal event in British social history, Olden merits our thanks. This is a well-written and important book and deserves to be widely read.” Adam Carter, Searchlight magazine review

"A timely reminder that neither institutional racism, police corruption, nor the old bill being in the pockets of the media, are anything new in London." Stewart Home, author 69 Things to do with a Dead Princess

"There seems to be a deep commitment behind this book to uncover who killed Kelso... The story that emerges from Olden's book is compelling... Murder in Notting Hill is an excellent read and highly recommended." Harmit Athwal, Institute of Race Relations

"In a small way this book offers a piece of justice for a man whose name will never be forgotten." Pendle Hart, The Hill magazine.