Stephen Lawrence and echoes of the past 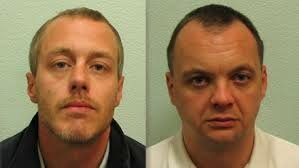 Norris and Dobson: middle-aged men who wouldn't warrant a second glance on any high street

“His murder was in effect a lynching. To look at Kelso Cochrane is to look at Stephen Lawrence and ask: ‘What it is that makes group of young white men do this? What is it that’s sewn into the culture that allows this stuff to flare?’”
Colin Prescod, Chair, Institute of Race Relations

A gang of around five white youths overpower a solitary black man on a London street at night. One of them drives a knife deep into him. The attack is unprovoked and over in seconds. There are a number of witnesses, but none can identify the assailants accurately enough to sustain a conviction. The murder occurs in an area targeted by the far-right, and home to a tight-knit community with a large criminal population who look dimly on those who assist the police. The names of those believed to be responsible are whispered around the neighbourhood. At the outset the police deny that the crime is racially motivated, and the case becomes a cause célèbre which activists rally around demanding justice.

The similarities between the murder of Stephen Lawrence near a bus stop in Eltham, south east London in April 1993, and that of Kelso Cochrane on a slum street in Notting Hill, 34 years before, are striking. But while the Lawrence case is burned into the public's consciousness – with the landmark Macpherson public inquiry and finally, after 18 years, the convictions today of two men, Gary Dobson and David Norris - the killing of Kelso Cochrane became an historical footnote. Yet it was arguably as much a defining moment in UK race relations.

If Kelso’s life hadn’t been cut short, he might still be around today, living out his dotage.

He was born 85 years ago in Johnson’s Point, a village with dirt roads and no electricity on Antigua’s south-west tip. In his early twenties he migrated to the United States, and after five years - in which he worked on a farm, joined the army and had a failed marriage - his visa expired and he was deported home. Opportunities in Antigua were scarce and he soon left once more in search of a better future. Joining the post-Windrush exodus of West Indians to the ‘Mother Country’, he arrived in Plymouth in September 1954, and settled in a bedsit in Notting Hill, one of the few areas black people could readily find accommodation at the time - generally in decaying terraces built in the mid-Victorian property boom, which had been divided into pokey multi-occupancy rooms. Here Kelso fashioned a life for himself: he worked as a carpenter (while aspiring to be a lawyer), had a steady girlfriend and was well-known within the exiled Antiguan community.

At around midnight on May 17 1959 he was walking home from hospital with his left hand in plaster after getting treatment for a broken thumb, when a gang of white youths approached and started jostling him. In an instant he was dying on the pavement from a single stab in his heart. The wound, the pathologist later found, was delivered with unusual velocity.

Initially at least, the political impact was greater than that of Stephen Lawrence’s death. Eight months before large-scale race riots had erupted on the streets of Notting Hill and Nottingham, making headlines around the world. The fascists Sir Oswald Mosley and Colin Jordan were busy fomenting trouble in Notting Hill and left-wing groups were actively opposing them, so Kelso’s murder induced panic in the corridors of power. The authorities’ feared that the random killing of a black man could trigger further racial violence.

At the same time, activists - including Claudia Jones, the Trinidadian-born founder of Britain’s first black newspaper, The West Indian Gazette - united around the death of the unknown carpenter to organise protests and campaign for laws against incitement to racial hatred. Hundreds crowded St Pancras Town Hall for a We Mourn Cochrane public meeting days after the killing. Father Trevor Huddleston, who had spent years ministering in South Africa's shanty towns and who the following month co-founded the anti-apartheid movement, was among the speakers. It was a moment pregnant with wider dangers, he contended: “Within this country we have the seeds of a racial discrimination that could be an absolute disaster to the future of Great Britain,” he said from beneath a twice life-size painting of the victim. “Colour discrimination is the supreme issue of our generation.”

On June 6 1959 more than 1,000 people - both black and white - attended Kelso’s funeral and the next day the News of the World offered a substantial reward for the capture of his killer. But when no-one was caught, the belief hardened among many black people that they were seen differently in the eyes of the law, and Kelso’s name came to symbolise the fight against racism - just like those of David Oluwale(1), Blair Peach, Zahid Mubarek and Stephen Lawrence in the years that followed. In 1965, six years after Kelso’s death, the UK’s first Race Relations Act came into effect.

Forty-six years later crowds have queued outside the Old Bailey for hours in often bitter weather to see Dobson and Norris prosecuted for Stephen Lawrence’s murder. The seven week trial of these small, not-quite middle-aged men who wouldn’t warrant a second glance on any UK high street - with their sallow complexions, receding hairlines and cheap-looking suits (to which, in Norris’s case, a poppy was pinned) - has been one of the most momentous this historic building has seen in recent times.

“They don’t know him like we do,” I overheard a large woman in the Dobson-contingent say, while waiting to go into court. Whoever the specific “they” she referred to was, the meaning was clear: her perception of him was different to the world’s.

The public have certainly been provided with ample detail about his life in the past 18 years. In fact, it’s hard to think of any murder suspects publicly exposed prior to their convictions in the way that Dobson and Norris have been over the years, (as have the other suspects, Luke Knight and the Acourt brothers, Jamie and Neil). From the release of the covert so-called ‘Footscray’ police recordings of their violent racist bile (named after the road Dobson was then living in), to their swaggering appearance at the Macpherson inquiry; from the Daily Mail dramatically naming them as murderers on its front page in February 1997, to the media charting their wayward steps into adulthood (including having children, gaining criminal convictions, living on benefits, joining expensive gyms, and – in the case of Knight – apparently getting treated for psychological problems by a black psychiatrist), their lives have been picked over in newspapers, books, documentaries and across the internet for years.

But what of the young men who attacked Kelso Cochrane? They were free to settle into lives of quiet respectability and obscurity, perhaps surrounded by children and grandchildren with no idea of their dark secret. Free to disappear into the shadows without the stench of what they did trailing them for the rest of their days.

Yet although the wider world never knew their names, the truth is that within the clannish community Kelso’s assailants came from, the name of the man who wielded the knife that killed him is no secret at all. In fact, it’s “the worst-kept secret in Notting Hill”. The police also had little doubt about his identity. Which begs the question, why wasn’t he convicted?

The police line in 1959 was that this failure lay, in simple terms, in the gap between believing something to be true and being able to prove it in court. Certainly detectives faced, in that cliché of crime-writing that still survives today, “a wall of silence”. One of the original suspects, by then a dying old man staying alive by intermittently gasping on an oxygen mask, assured me that anyone who gave evidence about the murder “would have been killed”.

Moreover, on the surface at least, the Cochrane police investigation appeared thorough, with 905 statements taken and a highly visible and apparently extensive search for the murder weapon carried out. (It was never found.) Similarly, a vast number of people were also spoken to in the original Lawrence investigation, with police conducting 2,600 interviews in the three years following the murder.

In both cases too, the police rejected the idea that racism lay behind the killings.

A senior Scotland Yard officer told the Daily Mirror shortly after Kelso’s death: “We are satisfied that it was the work of a group of about six anti-law white teenagers who had only one motive in view – robbery or attempted robbery of a man who was walking alone in the early hours of the morning...The fact that he happened to be coloured does not, in our view, come into the question.”

This sentiment was echoed by one of the detectives at the heart of the Lawrence investigation, who told the Macpherson inquiry: “I would say that the persons that were believed to allegedly be responsible were persons that would have killed anyone had they been there at the time. I do not think in my own mind this was a race attack. I believe this was thugs attacking anyone, as they had done on previous occasions with other white lads.” (2)

In the end, Macpherson laid bare in fine detail the failures of the first Lawrence investigation, and branded the Metropolitan police “institutionally racist”. While the same level of documentary evidence is not available in the Cochrane case, enough can be pieced together – primarily through previously confidential papers in the National Archives in Kew - to conclude that public order concerns trumped the authorities’ desire for justice, and the investigation was flawed in a number of serious ways. At a time when there was still the death penalty, a young white man going to the gallows for killing a black man might have led to widespread disorder, and there simply wasn’t the will to charge anyone.

It was advances in forensic science that finally saw the Lawrences get at least partial justice. Yet no such opportunity exists in Kelso’s case. In 2003 a ‘focussed forensic review’ was conducted by the Met’s Serious Crime Review Group at the behest of Kelso’s brother Stanley. The detectives found there was no forensic evidence to examine. Kelso’s clothes had been destroyed in 1968 “with the proper authority”. Any lingering chance of mounting a prosecution, therefore, has gone.

The implications of Stephen Lawrence’s murder for race relations, policing and justice in Britain are profound, and will be debated for years. Kelso’s name, by contrast, was largely forgotten by the wider public for decades. But his enduring legacy in the diverse, multi-ethnic neighbourhood where he died is summed up in the blue plaque on the pub just opposite the once-derelict junction where he was killed: “Kelso Cochrane...Antiguan carpenter was fatally stabbed on this site. His death outraged and unified the community leading to the lasting cosmopolitan tradition in North Kensington”.

(1) Kester Aspden’s book, The Hounding of David Oluwale (Jonathan Cape, 2007), is a powerful, humane account of the persecution of the homeless, mentally ill Oluwale by Leeds police officers.

(2) While senior officers in the Lawrence inquiry did acknowledge that racism played a part in the attack, the Macpherson report notes: “The failure of the first investigating team to recognise and accept racism and race relations as a central feature of their investigation of the murder of Stephen Lawrence played a part in the deficiencies in policing which we identify in this Report. For example, a substantial number of officers of junior rank would not accept the murder that the of Stephen Lawrence was simply and solely ‘racially motivated’.”