Buried in Time. The case of the last teenager hanged in England still haunts those who knew him.

Here's my take on the largely forgotten tale of Francis 'Flossie' Forsyth. In this case - unlike that of Keslo Cochrane, who was murdered a year before - the police's will to act was unquestionable. 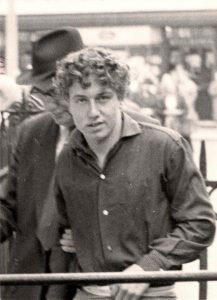 Flossie: "I only kicked him twice to keep him quiet."

On November 10, 1960, Francis ’Flossie’ Forsyth saw his girlfriend Margaret Catlin for the last time. Margaret was 17 years-old and heavily pregnant with his child. They were separated by a glass screen in bare room in Wandsworth Prison.

“Francis kept laughing and joking,” she said afterwards. “He didn’t talk about tomorrow once. He asked me about the baby, whether I was going to keep it or not, I told him I would and he said: ‘Good’.”

The next day 18-year-old Forsyth and his 23-year-old accomplice Norman Harris were hanged for murdering Allan Jee, a trainee engineer “of impeccable character… who would be most unlikely in any circumstances to be provocative to anyone”, in the words of a policeman who investigated the case.

One night the previous June – bored, drunk and skint – they had ambushed Jee on a dark, deserted footpath in Hounslow, that drab fringe of west London where the city merges with the suburbs. Jee had spent the evening watching a film in Richmond with the fiancée he’d got engaged to the day before, and was 20 yards from home.

It was Flossie who administered the fatal blows, kicking Jee’s head and fracturing his skull with his winkle picker shoes, as Harris and two other accomplices (who were later jailed) scurried away.

“I only kicked him twice to keep him quiet,” Flossie told a policeman later. “I did not think I had hurt him that much. We did not want to roll anybody but we had a few shants [drinks] and I always get a bit garrotty [violent] then.”

As he was led from his cell Flossie wept and said, “I don’t want to die.” Three hours later, Margaret Catlin received a telegram: “Always remember my star will watch over you both and give you the love and strength you so richly deserve my angel yours till eternity.” It was signed ‘Sloss’ - a mis-print of Floss. “I will not be afraid to bring up my child and tell it about its father even though he was hanged as a murderer,” Margaret told the Daily Express.

Few protested against the young men’s lot, despite the growing clamour against the death penalty. “It was such a brutal crime that these lads don’t seem to have won any sympathy,” said an old lady among the handful of demonstrators outside Wandsworth Prison on the morning they were executed.

Unlike Derek Bentley or Ruth Ellis, hanged in the same era and whose stories live on in films and books, the wretched tale of Forsyth and Harris is consigned to fading news clippings – although Flossie occupies a macabre footnote in the history of capital punishment as the last teenager hanged in England. Yet 56 years on, vivid memories of him – and the traumatic events which cut short three young lives – survive.

Brian Pease was 23 years old in 1958 and recently demobbed from the RAF when he started work as a relief housemaster at Ardale Approved School, an Essex borstal. Flossie, who was in there for shop-breaking, was among the first residents to introduce himself.

One day, stricken with the flu, Pease fell asleep on duty. Flossie woke him, took him to his room, made sure he was okay, and then occupied the other boys with table tennis. “I found him to be a very pleasant young man,” Pease recalls.

He read about his execution in the paper. “I remember thinking ‘Good God’. This was someone I knew and respected.” The case strengthened his hostility to the death penalty – which he has remained implacably opposed to ever since. “Those were the days of National Service, and that might have helped him change his life around. What a waste of a young man.”

Sheila Catton was 16-years-old and working in a shoe shop on Hounslow High Street when Flossie, who she knew from the area, walked in on June 28, 1960 - three days after the murder. Her recollections today differ slightly from those in her police statement (which is preserved in the National Archives).

“I was desperate to get away for lunch when Flossie came in. I sold him a pair of shoes and he asked if I could get rid of the ones he was wearing, so I carted them out the back. They had a stain on them but I didn’t think anything of it until the police came a few days later.” She never knew if the police retrieved them.

The proximity of the murder – 300 yards from her home, by a park she went to almost daily – and involving people she knew, means the case has never left her. Yet then, as now, she thinks Flossie got what he deserved. “I still believe in the death penalty,” she says. “It was a cowardly and completely unprovoked attack.”

How The Times reported the case 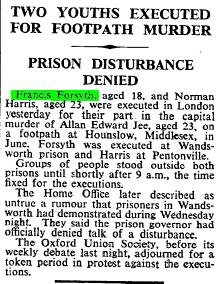 The case’s hold over the imaginations of those who knew Flossie is also clear on an internet forum where fragments of social history and morbid curiosity collide.

Among wistful memories of long gone youth (tearing out the cinema seats after watching Rock Around the Clock) and laments for a Hounslow “that was never the same after the murder” (and which now, according to one contributor, is “a shithole… the worst arguament [sic] for multiculturalism ever”), views on Flossie and his fate are split sharply.

“He was a likeable, funny, intelligent guy,” writes a friend from Ardale.

“If anyone needed a mentor it was Flossie,” another contemporary says. “Whenever I think about him it is with deep personal regret that I did not show him that he really had got his priorities all wrong.”

For one old schoolmate, Flossie was warped beyond salvation: “Once in a while someone either truly exceptional, or rotten, turns up. You see it in nature. A beautiful flower pushes itself out of a field of weeds. In the alternative a huge ugly weed can grow quickly out of a well-tended garden… For whatever reason, Forsyth was at the wrong end, and ever would be. He left nothing but trouble and anguish in his wake.

He was rotten to the core. He cared nothing about hurting others. He’s not missed, other than to pique our interest as to why he was the way he was. I’m glad he’s well out of the way.”

What of Margaret, Flossie’s heavily-pregnant 17-year-old girlfriend, who he promised to look over for eternity, and who, in turn, reportedly said she would bring up their child with full knowledge of his infamy?

Seven weeks after Flossie was hanged, she gave birth to a girl. The father’s name is absent on the birth certificate. A note says that the child was given up for adoption.

Four years later Margaret married, and now lives in a rural market town in the south of England.

Crashing into the life of someone who was totally blameless for terrible events many years ago is loaded with sensitivities - so I make my approach with caution. After a tentative letter, I give Margaret a call. She denies any knowledge of the case and puts the phone down abruptly.

How she views what happened almost 60 years ago, and whether Flossie’s daughter ever learned of the torrid circumstances surrounding her entry into the world, understandably enough, are not for public consumption.